We have been testing Storage Spaces Direct for a while on our Ebay cluster. We have been running development and some production systems. As the 2nd exchange node, a mediation server and our vmm server.

We have been looking to replace our current Hyper-V solution that consist of HP BL465c G8 and  BL490 G7 blade servers attached to HP P2000 G3 MSA over iscsi. This has been slower and slower as we have setup more virtual machines. This was a 12 disk shelf with 11 disks active with one spare. One 15k disk gives about 170 iops, giving a whopping 1870 iops on max speed. On normal load it would use about 1200-1500  IOPS so not a lot of spare IOPS. We had one pr cluster.

Most of you know what S2D(Storage Spaces Direct) is, if you don’t go look at Cosmos Darwin’s post over at Technet to get some good insight about S2D.

What i am going to focus on in this blog is the new Dataon HyperConverged server. Back at Ignite 2016  Dataon released there first offering the S2D-3110 all flash solution pumping out 2.6 Million IOPS in a 1u form factor. 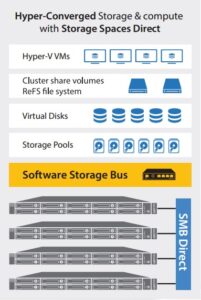 I had known about this solution for a while as i started looking into Dataon in feb 2016, and was informed during the summer about there S2D offerings. For us a all flash system was not needed and we wanted a hybrid solution with NVME for caching, SSD for performance and HDD for capacity. At Ignite i knew that there was a 2u solution on the way, the S2D-3212.

We decided to go for this and made the order in December. We settled on 2 4 node clusters. One for each of our data centers. This is the config we settled on.

We also decided to stay with our Dell N4064F switches for now, and upgrade to 40Gbit in the future. (Will come back to this point later.)

We received the servers and the packaging was rely good and i was like wow with the quality and detail on the outside and inside. Here are some pictures from the depacking and racking.

Packaging was rely good.as you can see on the pictures.

There is plenty of room here for more memory, 1.5 TB in total. If you look on both sides at the rear, on the left there is the 2 OS disks(Hot Swap) that are raided and at the right the 2 NVME 2.5″ Caching devices(Hot Swap)

This the 2.5″ NVME caching devices

And the servers racked. I rely like the blue colors of the disk activity

Configuring the servers is quite straight forward.

The ilo configuration must be done from the bios.

To configure Windows Server 2016 Datacenter for HyperConverged follow Microsoft’s guide at Technet. I also setup with logical switches in VMM that i deployed to the hosts before i setup the cluster. I used the combination of these two guides Charbel Nemnom and TechCoffe. Dataon is also delivering a full script to run, following there guided way of setting the solution up. I used a combination of Technet, Dataon Script, and the logical switch setup for VMM.

For the RDMA setup for the Dell N4064F switches i tried several combination. After going trough all the documentations i got the RDMA to work. But the side affect that i lost communication with all Port-Channels on the switch. That goes to my HP 6120XG blade switches. So had to revert back the DCB settings on the N4064F. It looks to be a spanningtree issue. Will look into this tomorrow with a Consultant from truesec.se. I will come back with update about the DCB setup for N4064F

But the configuration i used was.

Once i run the priority-flow-control mode on spanningtree starts doing all sorts of things. But all is working fine, once i applied the last line to the interfaces the connections to my blade chassies dropped. There was no new info in the switch console at this point. So why this happens is quite strange.

After setting all up, defining the 4 Virtual Disks for the 4 nodes, one on each node. I did run vmfleet to test the performance. I followed the pdf that is included in vmfleet and this guide.

When running vmfleet i used Perfmon to monitor disk activity. Go in and add these counters. And i used watch-cluster.ps1 that isincluded with vmfleet to see overall iops.

When running vmfleet with 10 vm’s on each host i noticed that one node was not performing at all. So i looked at perfmon i saw something i dread, Avg.Disk sec/read/transfer/write higher then 0.009, they where up to 6.something. When running vmfleet and pretty soon i had IO error when i run Get-PhysicalDisk on powershell on this disk. This means that the storage pool in windows is bypassing the read/write cache on the disk due to no Power Loss Protection. And this is no good, this makes the disk so slow. I managed to get out about 15k iops of that node after letting it run, but it would jump up and down bad.

Here you can see the problem om disk 1 today, i have migrated some VM’s to the other nodes but the parity will move data to it. I retired the disk but this looks to not have any affect. 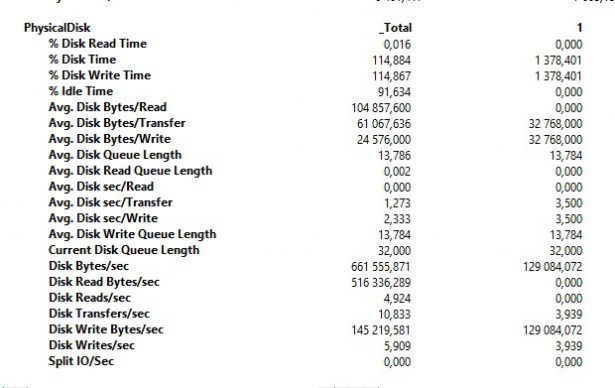 Spoke with Dataon and they shipped out a new disk with next day delivery which is Monday.

I recived the disk, replaced it, added it to the pool and rebuild was done in less then 10 minutes. Once the disk was in i had to run

This will rebalance the disk, and fix this little warning.

This means it needs a rebalanace.

Back to the ilo, it’s quite nice and simple. The remote ilo for mananging the desktop is quite sweet, it has alot of features and looks quite good. Default login on the ilo is admin admin. 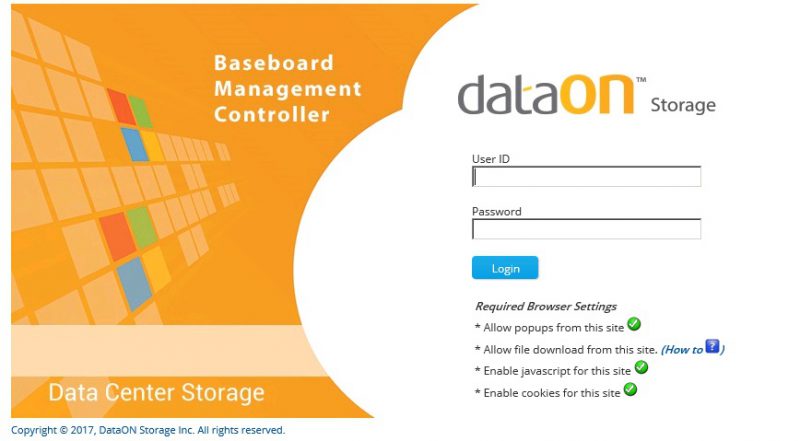 On thursday the 23rd of feb Dataon released Dataon Must, there monitoring solution. And at the same time there was a new pdf with overview 4 hyper converged solutions. And this page 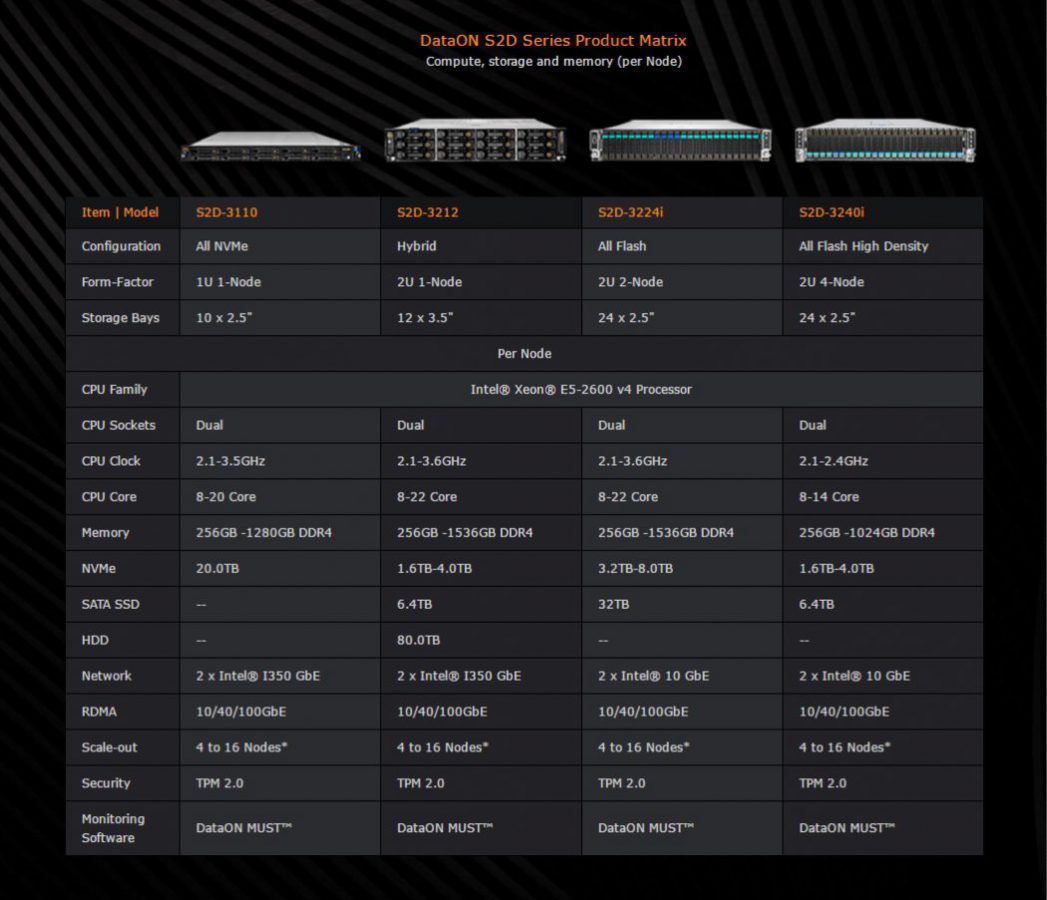 For Dataon Must i will give a write up of Must once i have it installed. I will also update this post later on.